A substantial amount of marketing/sales material and WEB (www.water-cti.com) site content shows that WCTI currently markets a “technology” for cooling tower water treatment based on cation softening of the makeup water. Marketing claims are made that the technology eliminates cooling tower blowdown and use of manufactured chemicals. Several patentsi are cited in their marketing and sales literature as the basis for this technology.

The current marketing and sales effort is distributor based with WCTI providing a license to distributors who are then required to use WCTI supplied water softeners, pay a royalty fee per customer, and provide routine customer service. Other than the noted WEB site, all marketing and sales activity is apparently being undertaken by the distributors via direct sales efforts and their own WEB sites such as www.h2oside.com, www.sio2tech.com and www.whitewaterco.com. In addition to the licensed distributors, WCTI is also reported to have s a number of sales “agents”, which have a primary duty to expand the network of licensed distributors and market the technology on a nationwide basis.

Several WCTI distributors are stating several obvious falsehoods in their literature, on their WEB sites, and in letters to potential customers as follows.

Review of the cited patents shows that the WCTI technology makes the following specific claims:


While a total of six (6) patents have been issued to WCTI, they are all rather similar in that the above claims are made with some other parameters, such as maximum conductivity, use of azole corrosion inhibitor, or the presence of metallic surfaces in contact with the cooling water, being the primary differences.

Review of the marketing claims for WCTI technology shows numerous problems when evaluated against accepted chemical principals and the reality of cooling tower operations as follows.

While it is generally accepted in the water management industryii that operation with pH values above 9.0 reduces the corrosion rate of ferrous metals, corrosion of aluminum, brass (dezincification), copper, and zinc (white rust) is accelerated. It is noteworthy that silicate, recommended as an additive in some cases by WCTI, is a specific inhibitor for ferrous and copper corrosion. White rust is a particular problem at pH levels above 8.2 and can only be controlled by addition of specific organic filming inhibitors.

Claim – Cycles of concentration (COC) are not limited with WCTI technology. Operation at COC values exceeding 200 are obtainable.

This appears to be pure marketing hype as cooling towers generally will go to a maximum COC between 12 and 50 due to windage (drift) loss from the unit, which is dependent upon its design, flow rate, operating load, and physical repair condition. The referenced Betz handbook shows that windage is commonly in the range of 0.2 to 0.02% of the cooling tower recirculation rate. Some simple calculations will show the maximum COC obtainable in any cooling tower due to windage loss.

The WCTI technology totally ignores deposition on heat transfer surfaces. It is common knowledge that cooling towers are excellent air scrubbers and that much of the debris removed from the air stream is insoluble.

Any cooling system operating at high COC must have both dispersants to suspend debris and some means for its removal from the system, typically blowdown and/or filtration. A recent patentiii clearly spells out this requirement.

Claim – Silica is a corrosion inhibitor.

Some WCTI – distributor literature reviewed addresses this chemical problem by claiming that at the higher pH values obtained by increased COC, 9.5 to 10.0, the silica present in the cooling water “polymerizes” to a reactive silicate. Given the manufacturing conditions utilized to make silicatesv, where sodium carbonate and silica are melted at high temperatures (>2000 F) to form sodium polysilicates, it is highly unlikely that there is any significant formation of silicate anion under the much less severe conditions obtained in a highly cycled cooling tower. Note that the monomeric silicates effective for control of corrosion are formed in water when the polysilicates formed under high temperature, extremely alkaline conditions hydrolyze in diluted water solution.

Claim – High pH and alkalinity obtained by high COC operation is biostatic and thus no biocides are required.

This is partly true in that biological growth is impaired, “biostatic”, at pH values above

9.0. However, impaired does not mean eliminated and use of a biocide is required to control biological growth within the cooling system. Note should be made that CTI, AWT, OSHA, and CDC only recognize oxidizing biocides as being effective against Legionella bacteria and the best oxidizing biocide at high pH is bromine. 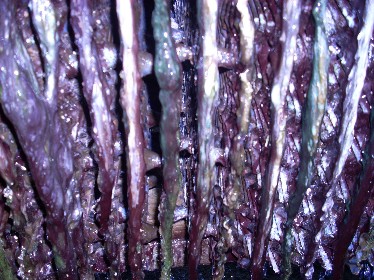 Algae growth on cooling tower fill with no biocide

In a memo provided to members of the Association of Water Technologies, Cooling Water Committee, Dr. Kati Rossmoore, Laboratory Manager, Biosan Laboratories, noted in answer to a question concerning WCTI claims that high pH in highly cycled softened makeup cooling towers control biological growth replied. “In mixed bacterial populations one species can contribute to the survival and/or growth to other species via producing metabolic by products that lower or increase the pH of the growth environment. For example, metal working fluids have usually a high pH range (pH> 9.5) and mixed bacteria communities can grow as high number as 108 or 109 cfu/ml. The simple answer to the question is that pH 9.5 or even pH > 9.5 is neither a biocide nor a preservative. Consequently bacteria can survive, multiply and grow in systems (cooling towers, metalworking fluids, etc.) having pH 9.5 or even higher.”

Claim – Testimonials are presented as to the efficacy of the WCTI technology; such as Boeing Company and Microsoft.

Testimonials lacking technical data are always suspect as to the real reason for the results claimed. In the case of both Boeing and Microsoft, their makeup water quality is known to be low in alkalinity and silica content, as well as corrosive ions such as chloride and sulfate. Given these factors, sodium silicate addition, which hydrolyzes to silicate anion on water dilution, is likely to be practiced at these locations based on the WCTI patent claims and such addition could easily account for the claimed results. Thus a program using softened, high quality (low chloride and sulfate) makeup with simple addition of sodium silicate would provide an acceptable program and totally account for the claims made. It should also be noted that the Seattle area is a low dust area, thus deposition would be much less of a problem than in locations such as Los Angles or Phoenix.

This again appears to be marketing hype given the clear use of sodium hydroxide, sodium silicate, and various azoles in the cited WCTI patents under specific conditions. 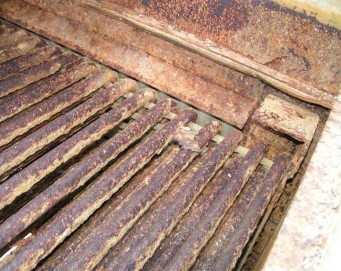 Following banning of chromium based inhibitors due to environmental problems, various corrosion control products based on combinations of molybdate, zinc, phosphate, polysilicate, and organic compounds were found to provide acceptable corrosion control. Current technology, as shown in PCT patent #8,128,841vi, utilizes an economic combination of phosphates, polysilicate, and specific organic corrosion inhibitors, including one specific for control of white rust corrosion at pH values above 8.2, and can provide mild steel corrosion rates of less than 1 mil/yr with zinc corrosion rates less than 2 mil/yr.

We note in the WCTI and distributor literature a lack of corrosion coupon study data to substantiate their claimed corrosion control.

As with non-chemical devices, WCTI technology will appear to provide acceptable results at some sites with good quality, low chloride/sulfate, makeup water. Sites with typical water quality will experience increased corrosion rates when using softened makeup water and operation at higher cycles of concentration in the absence of appropriate corrosion inhibitors.

For instance, a typical 1000 ton capacity cooling tower has an air flow of 290,000 cu ft per minute and can easily accumulate several inches of debris in the sump per month in the absence of blowdown and/or sidestream filtration. This issue is clearly addressed in PCT patent 7,595,000 which claims use of sidestream filtration on any cooling tower system operated at more than eight (8) cycles of concentration.

In the absence of environmental restrictions, there are no good reasons to operate a cooling tower with zero blowdown, or for that matter, at more than ten (10) cycles of concentration. The reduction in makeup water use and blowdown are really minimal past eight (8) cycles of concentration as shown by the following chart for a 1000 ton thermal load system.


Operation of cooling towers at very high cycles of concentration, or zero discharge mode, results in concentration of dissolved solids in the cooling water to levels of 10,000 to over 50,000 mg/l. The windage (drift) from such a cooling tower can present a significant problem as it is very alkaline, high pH, and can damage such things as automobile finishes, adjacent buildings, accelerate corrosion of various metal items, and kill or damage landscape plantings. It has been the experience of the reviewer that cooling water dissolved solids should be held to a maximum of 12,000 mg/l to minimize such effects.