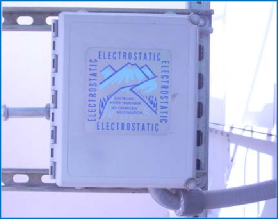 A new Phoenix, AZ, medical office building (MOB) was commissioned in March, 2010, utilizing a typical phosphonate-polymer water treatment program with stabilized bromine as the biocide. No scale, corrosion, or biological problems were reported during the one 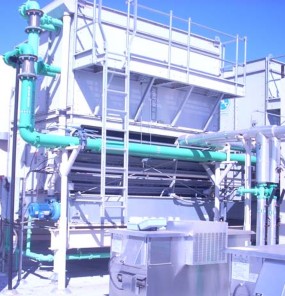 The cooling system consists of two BaltiBond coated BAC Model FXV 442 fluid cooler towers with galvanized steel tube bundles operated in parallel as a closed loop water source to heat pumps throughout the facility. The open water side of each cooling tower is equipped with a conductivity blowdown unit, blowdown settings of 4500 mmhos noted. A FluidTron ETI unit was observed to be wired to two exterior mounted boxes (one shown above), which were further wired to electrode units submerged in the two cooling tower basins. No corrosion coupon rack was installed and untreated makeup water was drawn from the Phoenix city water supply. Due to the recession, the MOB has never been fully utilized with current occupation estimated at 50%.

FluidTron sales literature and recent WEB site information (www.estatusa.com) notes that the NCD will treat cooling water for three common problems; scale, corrosion, and biological fouling. The literature also recommends supplemental filtration, flushing grids, and, when necessary, supplemental bio-control. It is interesting to compare current claims with past claims, which were much more extravagant as to the results to be obtained by NCD operation and which did not recommend any supplemental equipment.

The claimed mode of operation is that the NCD imparts a “charge” to particles and water passing through the device, as well as reducing the water surface tension.

We checked for a USEPA registration number, required if the device is claimed to control biological fouling. No registration was found in the WEB site literature or at the USEPA.

Our inspection of the cooling tower found that the tube bundle was severely corroded, white rust (zinc) and red rust (iron) corrosion products are present as shown in the following photograph. A hard, gray scale was also present between the corrosion deposits. 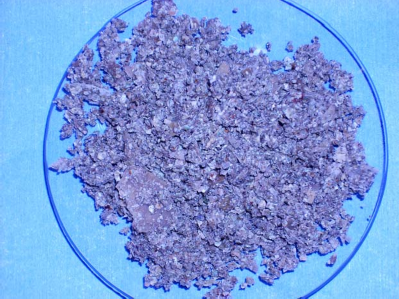 The cooling tower basins were then examined and a substantial amount, several inches, of deposit was noted on the bottom. On removal, the deposit appeared to be flakes of scale, a greenish color was noted, and the material had an obvious bad odor. This material is shown in the photograph at right on a laboratory watch glass prior to analysis. 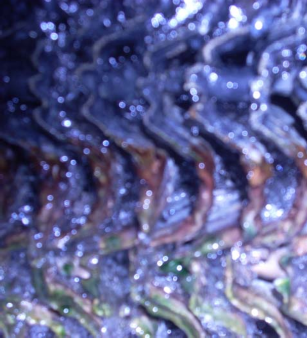 Inspection of the fill at the water line revealed substantial algae – biological growth as shown in the photograph to the left. We also noted the presence of what appeared to be a thin scale within the fill when the sheets were spit open.

Unfortunately, it was not possible to obtain a good photograph of this deposit.

Samples of makeup and cooling water, and the deposit found in the cooling tower basin, were obtained for laboratory analysis by Analytical Services, Inc., Brockway, PA, a state certified laboratory, PADEP #33-411, with the following results reported:

The makeup water as supplied was found to be scaling, saturation index (SI) of +0.7. Concentration by evaporation of this water would result in a substantial increase in scale formation potential.

Running a WaterCycle computer simulation, the saturation index for cooling tower #1 would be

The laboratory calcium:magnesium ratios of the makeup and two cooling towers waters are also substantially different, confirming a large loss of calcium from the cooling waters as compared to the makeup water.

The cycled chloride and sulfate levels found, 1,300 and 750 mg/l for chloride and 2,940 and 1,610 mg/l for sulfate are high and severe corrosion can be expected to result without use of a well designed corrosion control program.

Found pH levels, 8.4 and 8.5 in the cooling waters, are above the 8.2 where white rust becomes a major concern and would require a well designed corrosion control program for control.

A large amount of scale was present in the cooling tower basins, with little noted on the fill and tube bundles. It is believed that this observation is due to intermittent operation of the cooling tower resulting from the low building occupancy (low thermal load). The tube bundles and fill dry out between cooling tower operation periods and any scale that has formed flakes off the tube and fill surfaces as it dries and loses water. This explains the finding of a lot of scale flakes in the cold well basin deposit with only small amounts of hard scale observed on the tube bundles and within the fill.

Chemical analysis results from the cold well deposit are surprising in that while the expected substantial amount of calcium was present, zinc was present in an almost equal amount. The deposit found in the cold well is composed almost entirely of calcium compounds from precipitation of calcium found in the cooling tower makeup water and zinc compounds from corrosion of the galvanized tube bundle. The loss of zinc from the tube bundle due to white rust corrosion, combined with the high level of chloride and sulfate present, and intermittent operation of the cooling towers can explain why red rust is already evident on a tube bundle that is just two years old, in spite of the water being very scaling. It is expected that the tube bundles in these cooling towers will have to be replaced in the near future due to corrosion pin holing.

It is apparent that the NCD is not controlling scale formation within the cooling towers based on saturation index, mass balance, Ca:Mg ratio, and deposit data. Observation confirms the presence of limited amounts of scale on both fill and tube bundles, and a large amount of calcium and zinc based deposit in the cooling tower cold water basins.

While the planktonic ATP results were acceptable, sessile organism levels in the cold well deposit, as indicated by the high ATP results, were excessive. We are of the opinion that planktonic organisms are removed from the cooling water during calcium carbonate precipitation, thus they are present in the cold well basin deposit. This does present a problem in that the deposit provides a base for microbiologically induced corrosion as well as under deposit corrosion. Considering this information, there is no evidence that the NCD is providing any form of biological control.