“VRTX Chemical Free Cooling Water Treatment System” supplied by VRTX Technologies, 5850 Corridor Parkway, Schertz, Texas, 78154, ph: 800-722-0476, FAX 210-651-7538 WEB www.vrtx.com. This evaluation is the result of a discussion between the reviewer and a principal of VRTX at the 2007 Association of Water Technologists Convention. This discussion resulted in an invitation to evaluate a VRTX installation with hard water makeup located in Tollison, AZ. The evaluation was carried out on January 16, 2008, with Mr. Leon Shapiro, VRTX Regional Manager, representing the manufacturer.

The system being treated consists of three (3) BAC Model CVX 398 ammonia condenser cooling towers with separate sumps. According to the operator, the cooling towers were installed about 2001 with an acid based chemical water treatment program used. 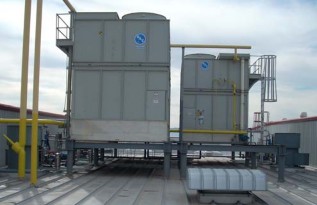 Due tosevere corrosion damage, two of the units, CT #2 and 3 (shown to left), were replaced in 2006, with the third unit (CT #1) scheduled for replacement in early 2008. CT #1 was not operating during the evaluation. CT #2 and #3 were supplied with the BaltiBond anti- corrosion coating and stainless steel basins, while CT #1 was a standard galvanized unit. All three units are used for cooling of a refrigerated products warehouse.

The VRTX WEB site was reviewed on February 6, 2008, for current claims. We found under “The Technology” section of the WEB site that the VRTX device controls scale by “- the kinetic energy released when the water streams collide forces solid particles of calcium carbonate from solution to form non-sticking CaCO3 colloids. These colloids attract dissolved calcium and carbonate ions, and are then filtered from the water stream.” Thus, it appears that the device forces precipitation of calcium carbonate in the bulk water, subsequently removing the precipitate by filtration. Removal of the calcium carbonate then presumably makes the cooling water non scale forming. 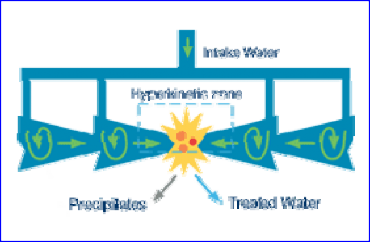 Corrosion is claimed to be controlled by “a region of near perfect vacuum forms which strips dissolved CO2 from the water and typically maintains pH of the water near or above 8.5.” Apparently, pH control functions as the sole means of corrosion control.

Bacteria are controlled by “-tremendous localized temperatures and extreme fluctuations in fluid pressure within the VRTX chamber causes cell walls of microorganisms to rupture.” From this description, only planktonic organisms passing through the unit would be controlled, sessile organisms would be totally uncontrolled. No USEPA registration number was found on the WEB site for use of the VRTX as a pesticide device.

A VRTX system consisting of one 10 hp VRTX Cavitation Chamber unit and three separate skidded 10 hp hydrocyclone and cartridge filter units were installed and started up in August, 2007. The Cavitation Chamber, shown to the front in the picture, was piped to draw and discharge to all three cooling tower basins, while each filter unit, one in the background of the picture, serviced only one basin each. Other than supplemental use of 35% hydrogen peroxide for occasional algae control, no chemicals have been used in treatment of the three systems since that date.

Walchem conductivity based blowdown controllers were installed on each filter unit with blowdown control limits of 3500 mmhos noted, readings on the two operating systems, CT #2 and 3, were 3230 and 3143 respectively. Corrosion coupon racks were installed, but to date no studies have been completed. Makeup water is obtained from the City of Tollison with the reported analytical data being typical for this area. Note that city water quality varies substantially in this area with time due to use of several local source wells.

The reviewer and Mr. Shapiro visited the site on January 16, 2008, to examine the installed VRTX system, take water samples, and examine the cooling towers. As noted, this was an invited examination of the system by the device manufacturer. 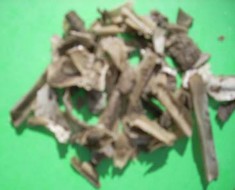 CT #1 was observed to have severe corrosion damage, believed to be due solely to misapplication of the previous acid treatment program. CT #2 was found to have a slight algae growth on the edge of the fill along with white rust of the condenser tubes and small areas of hard scale in low flow areas on the hottest tubes. CT #3 had substantial scale in the cooling tower fill with slight white rust on the condenser tubes. A photograph, taken on-site, of scale removed by the reviewer from CT #3 fill is to the right.

All obtained samples were analyzed by Analytical Services, Inc., a state and ISO certified laboratory, with the following results reported.

Scale Control: The analytical data on the waters from both cooling towers clearly shows a substantial loss of calcium from both systems using the cycles and Ca:Mg ratio comparison methods, as well as a substantial loss of alkalinity. This analytical loss is confirmed by the small hard scale deposits observed in hot spots on the condenser tubes of CT #2 and the extensive scale found in the fill of CT #3. Analysis of the scale sample removed from CT #3 fill shows it to be a typical high calcium carbonate scale, which would be expected when operating a cooling system above the saturation index without chemical scale inhibitors.

While the VRTX obviously did not control scale formation within the treated cooling towers based on the analytical data and scale formation noted by observations, the cooling towers did not show the massive scale deposits which could be expected when operating at such high cycles with hard, alkaline makeup water. One obvious explanation for this is that bulk precipitation of calcium carbonate in the cooling tower basin, where the makeup water is added to water at a high pH and alkalinity, is taking place. The suspended calcium carbonate particles formed, removed by the installed bypass filters, would substantially lower the potential for scale formation in other parts of the cooling system. “Forcing” precipitation, as claimed by the VRTX device, is not needed as the calcium carbonate would precipitate due to its being concentrated far beyond its solubility by simple cycling.

The statement that the VRTX “-typically maintains pH of the water near or above 8.5” to control corrosion ignores the fact that white rust corrosion of galvanized steel only occurs above a pH of 8.2, and is accelerated by higher pH values and higher alkalinities. Due to lack of corrosion coupon data and the construction of the cooling towers, we cannot comment upon the claim made for corrosion control on steel, copper, and brass.

However, we can state based upon observation that the VRTX device does not control white rust corrosion.

Biological Control: Considering the claims for bacteria control, we note that coagulation of bacteria during precipitation is a common procedure practiced in many potable water treatment plants world-wide. Since we are of the opinion that bulk calcium precipitation is taking place within the cooling tower basin upon makeup addition, this effect, plus the side stream filtration and occasional use of hydrogen peroxide, easily accounts for the observed low ATP results. Unfortunately, for cooling tower operation, one must consider control of both planktonic bacteria, which are removed by coagulation, as well as the sessile bacteria (and algae!), which are not. Sessile bacteria and algae, which cannot be controlled by the VRTX device, form the problem biofilm in cooling tower systems, not planktonic bacteria. 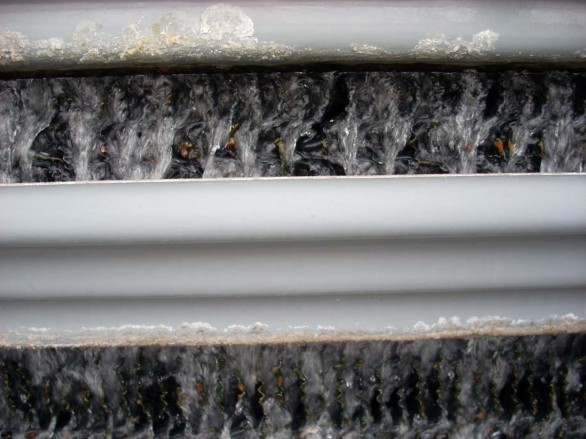 Based on the analytical data, observed scale, and white rust; we can conclude that the VRTX device does not control calcium scale formation, or white rust corrosion, when highly scaling, alkaline makeup water is used.

Given the facts of the matter, with side stream filtration, occasional use of hydrogen peroxide, and the high probability that some bulk calcium carbonate precipitation is taking place in the cooling system; it is very likely that the VRTX device has little or no effect on bacteria within the cooling water system. However, a firm conclusion cannot be rendered at this point with the data available.

Observation of algae growth on the cooling tower fill is a good indication that the VRTX device offers no control of algae in a cooling water environment.

Insufficient information is available to make any judgments upon the claimed ability of the VRTX device to control corrosion of steel, copper, and brass.