Cooling towers are a preferred site
for growth of the bacteria, providing
generally favorable conditions for
reproduction and subsequent
dispersal via the aerosols produced
during cooling tower operation. 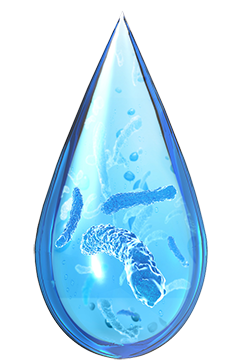 Legionnaires’ disease (Legionellosis or LD) was
recognized as a specific bacterial disease, caused
by legionella pneumophila in 1976. Spread of the
disease is generally linked to water system
aerosols, with cooling towers being a prominent
source. For instance, in July, 1995, three deaths
and thirteen confirmed cases were linked to the
cooling tower system at a hospital. Industry is not
immune, as shown in March, 2001, where four
employees at a casting plant contracted LD,
resulting in two deaths. Recent estimates by the
Centers for Disease Control (CDC) and the
Occupational Health and Safety Administration
(OSHA) show annual infection rates between
8,000 and 18,000 in the United Sates.

The LD bacterium, legionella pneumophila
(Legionella), is really quite common, being found
in most soils throughout the world. It becomes a
public health and safety problem when it
reproduces in large numbers in a suitable water
environment and is subsequently dispersed into
the air as an aerosol. A respiratory infection
results when a sufficient number of the airborne
bacteria are inhaled. Cooling towers are a
preferred site for growth of the bacteria,
providing generally favorable conditions for
reproduction and subsequent dispersal via the
aerosols produced during cooling tower operation.

Recent testing for the presence of Legionella
bacteria in several cooling systems using ZeroTek
water treatment programs have resulted in “none
detected” reports. These results prompted review
of the scientific literature and discovery of a
published report (1). This report clearly shows
that multiplication of Legionella bacteria in
cooling tower water is inversely correlated with
increases in pH and alkalinity. Given the reported
pH tolerance range for Legionella bacteria of
5.5 to 9.2, operation of cooling towers with
cooling water pH values above 9.2 and high
alkalinity is a means for controlling Legionella
bacteria in cooling towers.

An International Water Conference paper (2)
notes that higher pH and alkalinity values not
only curtail growth of Legionella bacteria, but
also have an adverse effect on other
microorganisms. Some additional comments on
the control of microorganisms are also found in
an article in the Analyst (3) where it is
theorized that high pH and alkalinity combined
with the high dissolved solids typically found in
cooling towers operating with cation
exchanged makeup water is biostatic to all
microorganisms.