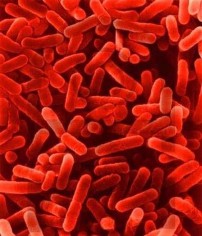 Legionnaires’ Disease (Legionellosis) was recognized as a specific bacterial disease, caused by legionella pneumophila, after it killed 34 members of the American Legion who contracted an acute pneumonia infection while attending the 1976 Legion convention in Philadelphia. Spread of the disease is generally linked to water systems, with cooling towers being a prominent source. For instance, in July, 1995, three deaths and thirteen confirmed cases were linked to the cooling tower system at the Chambersburg, PA, hospital. Industry is not immune, as shown in March, 2001, where four employees at the Ford Motor Company, Cleveland, OH, casting plant contracted Legionellosis, resulting in two deaths. Recent estimates by the Centers for Disease Control (CDC) and the Occupational Health and Safety Administration (OSHA) show annual infection rates between 10,000 and 25,000+ in the United Sates alone. Legionellosis is a deadly menace in any commercial or industrial facility equipped with a cooling tower system. Recent data shows that the mortality rate for the disease is typically 5 to 15%, with rates as high as 30% when less resistant populations are exposed!

The Legionellosis bacterium, Legionella pneumophila (Legionella), is really quite common, being found in most soils throughout the world. It becomes a public health and safety problem when it reproduces in large numbers in a suitable water environment and is subsequently dispersed into the air. A respiratory infection results when a sufficient number of the airborne bacteria are inhaled. Cooling towers are a preferred site for growth of the bacteria, often providing favorable conditions for reproduction and subsequent dispersal via the aerosols produced during cooling tower operation. Other water systems, such as building hot water supplies, chilled water systems, potable water supplies, spas, decorative fountains,, evaporative air coolers, air washers, and industrial quench systems; have also been found to harbor sufficient bacteria to cause infection should the water be dispersed into the air.

Once the specific problem presented by Legionellosis was recognized as relates to cooling tower system operations, health related organizations worldwide such as CDC, OSHA, and US Veterans Administration (USVA); and industrial associations involved with cooling tower systems such as the American Society of Heating, Refrigerating, and Air Conditioning Engineers (ASHRAE), Cooling Technology Institute (CTI) and Association of Water Technologies (AWT); instituted on-going research programs to devise monitoring and control methods.

As could be expected from the number, and differing primary missions, of the various groups involved, a large number of often confusing, and sometimes conflicting, opinions and recommendations have resulted concerning control and monitoring of legionella in cooling tower systems.

For instance, the main recommendation, to date, by the CDC for control of legionella in cooling tower systems is summed up as “control total biological activity in water systems via routine use of USEPA approved biocides and keep the systems clean”. Concern is also expressed about the “high cost of an environmental investigation and of instituting control measures”. Routine monitoring is not recommended since “the relationship between the results of water cultures and the risk of legionellosis remains undefined”.

In their standard EC 1.7, effective January 1, 2001, the Joint Commission for the Accreditation of Healthcare Organizations (JCAHO) requires that all accredited facilities have a management program to “reduce the potential for organizational-acquired illness” and “managing pathogenic biological agents in cooling towers –“. While the accredited facility is required to control legionella in their cooling towers, little guidance is provided on the actual how-to and what is considered acceptable “managing”.

Neither organization recommends routine monitoring for legionella due to cited problems such as:


A new ASHRAE Standard 188P, “Prevention of Legionellosis Associated with Building Water Systems”, will issue in 2012. While this is not a regulatory standard, it will become an ANSI Standard and thus will be incorporated into model building codes and eventually into all state building codes and practices. ASHRAE has elected to use Hazard Analysis and Critical Control Point (HACCP) plan methodology as the recommended systematic disease prevention strategy for Legionellosis. The 188P Standard is designed to (a) alert operators to which facilities will require HACCP plans, (b) provide specifications for developing a HACCP plan, and c) provide information to facility managers on how to comply with the standard and any resulting HACCP plan. 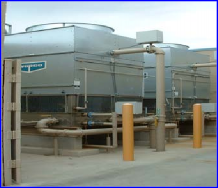 This ASHRAE standard has very specific HACCP guidelines for controlling risk from cooling towers and evaporative condensers, which reviewed in the following section of this bulletin.

Other regulatory agencies have taken even more definite positions; many European and Australian public health agencies require that all cooling towers be operated with continuous halogenation, specific monitoring and reporting guidelines are in place to enforce the requirement.

All operators of cooling towers have both an ethical and a legal obligation to prevent transmission of disease to their employees, customers, patients, and the general public. The legal liability associated with operating a cooling tower without the best technology for control and monitoring of legionella is very substantial. In the past ten years, many large firms have been forced into bankruptcy by civil suits based on such health and safety issues.

The historic problem for operators of cooling towers of determining the best technology for control and monitoring of Legionella, and implementing it in a cost effective, documented manner, has now been solved by ASHRAE with their Standard 188P.

For the majority of commercial and industrial facilities, those sections of Standard 188P that address risk reduction from operation of cooling towers and evaporative condensers will be the major concern. The following is a brief outline of the Standard’s requirements for existing facilities, new facility construction has some additional requirements.

The HACCP plan will includes a written maintenance plan that:

The HACCP plan shall meet the following requirements regarding startup and shutdown procedures. It shall:

Each of these shutdown and startup procedures shall identify the parties responsible for initiating and executing the procedure.

The HACCP plan shall includes the following two disinfection procedures:

ProChemTech International is a designer/supplier of cooling tower systems and water management programs for operating systems; and operates cooling towers at its own manufacturing plants. We have reviewed the many recommendations, guidelines, and position statements; and conducted a four year legionella monitoring program, analytical work by the Special Pathogens Laboratory of the USVA covering over 150 ProChemTech managed cooling systems. (Note that the cost of a single legionella analysis by this world class laboratory is less than $150, is this “high cost”?)

We have found that legionella monitoring is a valuable tool for adjustment of cooling water management programs to minimize the level of legionella present in cooling water when combined with routine biological testing of recirculated cooling waters, using control points of 10,000 colonies per ml maximum, measured using plate counts; or 2000 RLU maximum, measured using the ATP method. Legionella testing on a twice a year basis was effectively used as a means of assessing the effectiveness of the water management program in keeping this specific bacteria under control.

These findings support the on-going research in the United Kingdom, and by Dr. Janet Stout, Special Pathogens laboratory, that has demonstrated that oxidizing biocides, such as chlorine, bromine, chlorine dioxide, and ozone; were more effective at controlling Legionella than non-oxidizing biocides; such as glutaraldehyde, quaternary amines, and isothiazolin. We can thus conclude that any effective water treatment program must incorporate routine use of an oxidizing biocide for control of Legionella. 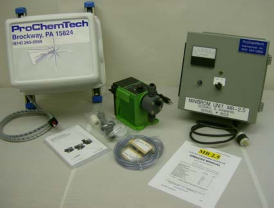 Our company has developed a unique, patented, process for cost effective halogenation of cooling towers, electrolytic bromine generation. Electrolytic bromine generators consist of a power control panel and electrochemical cell that convert either a concentrated non-hazardous mixed salt water solution into bromine, or convert bromide ions in the cooling water into bromine via a side stream electrochemical cell. Units are sized from the “MiniBrom” capable of 1.0 pound per day of bromine

production and suitable for many smaller HVAC applications, to large “ElectroBrom” and “SSBrom” (side stream) units, producing up to 60 lb/day and usable in the largest power plant cooling tower. Note that these units are produced in a USEPA registered facility.

In addition to electrolytic bromine generators, our firm has developed and manufactures a USEPA registered liquid “stabilized bromine” (PCT 3026), which is an economical halogen biocide. For those installations that do not wish to install any additional equipment, use of stabilized bromine is a simple, economical means to add a halogen oxidizing biocide to a water management program using just a timer and chemical pump.

At present, the best technology for control of Legionella has been defined by ASHRAE in Standard 188P. Our specific work has shown

the following to be of direct application.


Our commercialization of both stabilized bromine and electrolytic bromine units makes routine halogenation the safest, most cost effective means to control legionella available. Use of either of these technologies eliminates the remaining technical and financial reasons against halogenation technology for control of Legionella in cooling towers.

www.legionella.org – the site for all recent research, testing services